When we choose the profession of educating young people, we do it because we have a desire to make a difference in the lives of others.

Whether we talk about it or not, this desire exists somewhere inside of us. And making a difference means helping our students change for the better. It means we are not satisfied with the status quo and just allowing others to cruise through life without being challenged.

Within those challenges, we sometimes mess up. We try to help our students be the best they can be, but sometimes it blows up in our face and doesn’t work like we planned.

When this happens, we need to remember to do the #1 thing we can do to improve any relationship.

So here’s the challenge for ourselves as educators:

Reflect on a relationship where you feel you have failed to treat someone as well as you should. Analyze your behavior in this relationship for areas where you need to improve so your actions line up with your principles.

This challenge comes from our fundamental of success of Living by Principles, which is the outside action fundamental that comes from Knowing Our Integrity.

Sometimes we become obsessed with trying to follow celebrities and superstars. We think because they have achieved some external results in their lives then we need to try to copy everything they do. But if we read the autobiographies of professional coaches like Pete Carroll (who we talked about in our article Know What to Put First) and Phil Jackson, we discover just how human they are. They have won championships in their respective sports, yet they endure some of the same struggles we all deal with when we are leading people in a classroom or on a playing field or court.

Phil Jackson was a basketball coach in the NBA and won 6 championships with the Chicago Bulls during the Michael Jordan era of the 1990’s and 5 championships with the Los Angeles Lakers with players like Shaquille O’Neal and Kobe Bryant. In his book 11 Rings: The Soul of Success, Jackson shared a story about a relationship where he didn’t necessarily treat one of his players according to his principles.

Horace Grant was one of the lesser known players on those Chicago Bulls teams. He was an outstanding rebounder and defender who played a key role but didn’t always grab the headlines.

Coach Jackson was looking for ways to motivate the team and bring them together. One of his assistant coaches suggested he use Horace as a whipping boy. He would focus most of criticism on this one player in hopes the other players would rally together to stand up for their teammate and forge a stronger bond with each other.

Jackson didn’t necessarily agree with this type of coaching, but he tried it in an effort to unite the team. The coaches told Horace about their plan so he knew it was coming and he was willing to take the criticism to help the team.

However, after a while Jackson could tell the criticism was starting to wear on Horace and it exploded during a highly contentious playoff game.

The opponents were throwing cheap shots at Horace, which the referees weren’t calling. He finally lost his composure and, when he retaliated against one of the cheap shots, he was called for a foul. Coach Jackson took him out of the game and yelled at him. Horace responded with some curse words and told Phil he was tired of being his whipping boy.

The Bulls lost the game and Jackson admitted it wasn’t his finest moment. He said he learned a key lesson: how important it was to relate to each player as an individual, with respect and compassion, no matter how much pressure he was feeling.

So what did Coach Jackson do about it? He met with Horace and told him they needed to start over. He said he would focus on giving Horace constructive criticism and asked Horace to tell him when something was bothering him. He also explained to the team what had happened and told them he made a mistake.

In the next game, Horace played like a man possessed, according to Jackson. He scored 22 points, grabbed some key rebounds, and led the Bulls to victory.

Those are some pretty good results.

But they probably wouldn’t have happened if Phil Jackson didn’t have the courage to admit his actions didn’t line up with his integrity. Instead, he seized the opportunity to improve the relationship with Horace and with the entire team.

The #1 thing we can do to improve any relationship is admit when we mess up…and apologize…and take action to make the relationship deeper and stronger.

It’s about having humility.

It’s about the desire to learn, grow, and change.

It’s about focusing on WHAT is right over WHO is right.

Can you reflect on a relationship where you feel you have failed to treat someone as well as you should? Can you analyze your behavior in this relationship for areas where you need to improve so your actions line up with your principles?

Creating the Conditions for Success

In 11 Rings, Phil Jackson said, “Winning a championship is a delicate balancing act, and there’s only so much you can accomplish by exerting your will. As a leader your job is to do everything in your power to create the perfect conditions for success by benching your ego and inspiring your team to play the game the right way. But at some point, you need to let go and turn yourself over to the basketball gods. The soul of success is surrendering to what is.”

Creating the conditions for success…

Phil Jackson discovered part of those conditions are establishing relationships with his players to help them play to their full potential, thereby making the team even stronger. He did that by admitting he was wrong and writing his own story to make sure he lived by the principles which made up his integrity.

This is what each of us can do in our work as teachers and coaches with young people. We can write our own story by sticking to the fundamentals of success to improve our relationships.

When we do, we will create a legacy of impact by giving our students and athletes a better version of ourselves every day.

Take the next step in your leadership journey... 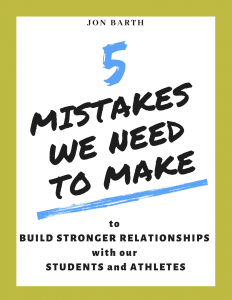 ...learn the mistakes which will help you grow stronger relationships! 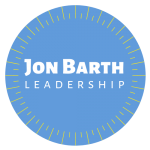