If we want to Be a Lighthouse who creates impact and makes a difference in the lives of others, then there is one thing we HAVE to do.

Describe a part of your personality the world does not ordinarily see. Analyze how your life would change if you allowed the world to observe this part of you, which you currently keep inside.

One of the greatest example of Being a Lighthouse in our world today is Malala Yousafzai. She has become such a beacon of hope that most people around the world recognize her simply from her first name.

Malala was born in Pakistan in 1997. Her father was a teacher at a girls school in their village. Malala attended school there until the Taliban took over and imposed many harsh restrictions on the Pakistani people, which included disallowing girls to attend school. A few years later at the age of 15, Malala spoke out publicly on behalf of girls and their right to learn. This made her a target.

In October of 2012, a man boarded Malala’s school bus as it brought her home.

The man asked, “Who is Malala?” Then, he shot her in the head.

Now do all of us need to put our lives in danger in order to be a lighthouse? Not necessarily…but we can learn several lessons from Malala’s story.

The first lesson is…Being a Lighthouse and a beacon on the world stage is not everyone’s story. Our light might only be meant to serve one person. For Malala’s father, his light was giving his daughter the opportunity to learn and her story is one which then had an international impact.

Sometimes we need people to make the assist. Sometimes our light shines on a smaller stage, but it is setting up someone else to share their light on a bigger stage.

The second lesson is…it comes down to making a choice. Malala made a choice of whether or not to attend school. She made a choice to speak out publicly. And she had a choice after recovering from her injuries of whether to fade away into obscurity or to keep fighting for what she believed: the right for every girl on the planet to have the opportunity to attend school and learn.

Finally, the third lesson is…it takes a tremendous amount of courage. This is what makes being a lighthouse so scary. There are people who want to extinguish our light because it threatens them. But if we truly want to be a leader…if we want to experience success…if we want to reach our full potential…then we don’t really have a choice.

We HAVE to let our light shine.

We have to open ourselves up and let the world see what we really have inside of us.

Take Control of Our Voice

Sometimes we need to be our own coach. We need to take control of the small voice in our head to Write Our Own Story. Because if left on its own, our voice will often sabotage our ability to Be a Lighthouse.

The greatest inhibitor to experiencing success and reaching our full potential is often that voice in our head. This small voice tells us we are not good enough and we don’t have anything to give to the world.

We need to have a filter between our head and our heart so when our voice does get negative we can stop those words and those ideas from planting in our heart. We can take control of the voice and use it for hope and encouragement before spills over into our actions.

The truth is we all have a light inside of us. Many of us are scared to let our light shine because it challenges the status quo and threatens to take away power from people who thrive on corruption, lack of integrity, and violence.

Remember, lighthouses don’t go out and rescue people…they simply stand on solid ground. They let their light shine so others can use it for direction, guidance, and hope.

So don’t listen to the voice which says our light doesn’t matter.

It matters every day.

We need to let our light shine so we can increase our impact on our students and athletes by giving them a better version of ourselves every day.

So How About You?

What is a part of your personality the world does not ordinarily see? How would your life change if you allowed the world to observe this part of you, which you currently keep inside?

Our light may be meant to shine on a smaller stage. We might be worried about the choices which confront us. Courage may not be one of our greatest attributes.

But if we want to create stronger relationships with our students and athletes we need to summon the courage to be lighthouses even if the small voice in our head tries to talk us out of it.

Because if we truly want what is best for the young people we work with, then we really don’t have a choice.

We HAVE to let our light shine.

Take your leadership to the next level by learning 5 mistakes you need to make to build stronger relationships with your students and athletes! 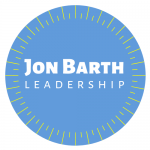